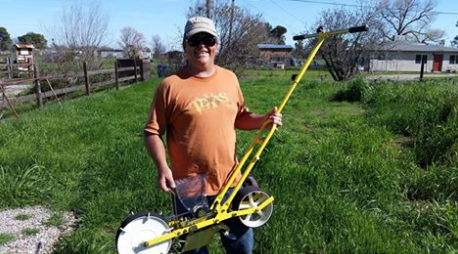 California AgrAbility Staff met Ben Lyons at the Hoes Down Festival in the Capay Valley. His family was concerned that Ben would not be able continue to work on his farm if his pain continued to develop. Ben was diagnosed with tennis elbow making it difficult to milk his goats and steer his 3 tractors. Because of this, he engineered a seeder constructed from crutches which would assist him in seeding his farm.

Staff connected him with several assistive devices to help him on his farm tasks. Staff introduced him to the Henry Goat Milking Kit. The milking kit uses pressure to milk the goat without needing to use his hands to pinch the udders. Staff also connected him with the Tri-pod steering wheel which allowed Bennet to relax his hands between the rods as he steers reducing the need to use his thumbs. A United For Cause group of students reached out to AgrAbility to help them connect with a deserving farmer. They raised money so that Ben would be able to purchase a seeder. These tools allowed him to continue managing and working on his farm. His family now can live worry-free that Ben will not further injure himself while working on his farm.